*singing*   I don't think you're rea-dy for Con-fetti!  (to Bootylicious by Destiny's Child)

Alright got that out of my system.  >.<
So we're focusing on the Confetti set with easily obtainable robes and the head & shoulders that are NOT priest only.

{Remember however if you ARE a priest you can use either of the head/shoulders combos on the previous post as well. } 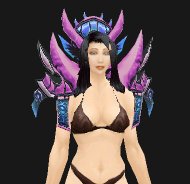 Scintillating Headdress of Second Sight  drops from Heroic-only Auchenai Crypts
& Vestia's Pauldrons of Inner Grace   drops from Normal or Heroic Mechanar - Cache of the Legion - Wowhead posts say this auto unlocks now from killing Gatewatcher Gyro-kill.
{Sadly, I killed both Gatewatchers & Gyro-kill was the second one I killed, so I cannot confirm this for myself yet.}

Additionally,  for the gloves/belt/bracers/boots you can use any of the combos shown in the Confetti sets on the previous post,  however I'm going to be focusing on these two combos:
Combo 1: Non-Heroic

Lookalike Robes
There are 3 robes with the same model as Juju Hex Robes, that you can transmog, however none of them are the white/pink color.

Alternative Robes
These are different model robes that look nice and are easily obtainable from your Auction House, or you can also farm them if you feel the prices are too high.